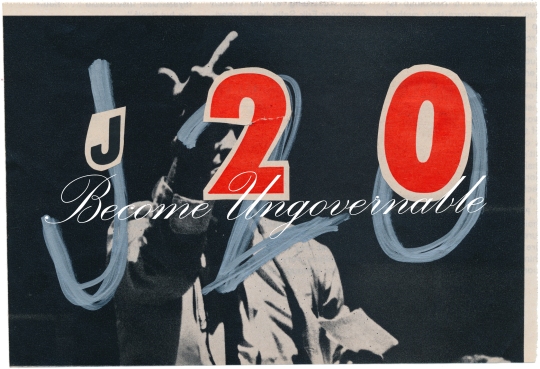 On J20, as Trump tries to inaugurate a new regime of white supremacist control and domination, people across Turtle Island will be inaugurating their own new era: a flowering of self-organized resistance, community self-defense, and solidarity projects. Here in Detroit, let’s join together on #J20 in refusing white nationalist ascendance *and* the indefensible racial capitalist, settler colonial regime of terror the United States always already has been! #EmbraceUngovernability #FuckTrump (and Clinton) #AmerikaWasNeverGreat. Most important, our dreams are too beautiful to ever fit in their ballot boxes! So let’s create a visible presence for systemic critique and liberatory visions.

Meet up at 5 p.m. outside Greektown Casino, 555 Lafayette, Detroit. We’ll be bringing a bunch of banners, signs, buttons, music, and free literature, but you’re welcome to make your own “become ungovernable” images. Plans include sticking together to meander through downtown, and time to share our current and future efforts/ideas with each other so as to encourage a variety of imaginative self-organization in the days and months ahead.

All who hold to the “principles of solidarity” below are welcome. Spread the word; bring yourself and many others!

* Our solidarity will be based on respect for a political diversity within the struggle for social justice. As individuals and groups, we may choose to engage in a diversity of tactics and plans of action but are committed to treating each other with respect.

* We realize that debates and honest criticisms are necessary for political clarification and growth in our movements. But we also realize that our detractors will work to divide by inflaming and magnifying our tactical, strategic, personal, and political disagreements. For the purposes of political clarity, and mutual respect we will speak to our own political motivations and tactical choices and allow other groups and individuals to speak on their own behalf. We reject all forms of red-baiting, violence-baiting, and fear-mongering; and efforts to foster unnecessary divisions among our movements.

* As we plan our actions and tactics, we will take care to maintain appropriate separations of time and space between divergent tactics. We will commit to respecting each other’s organizing space and the tone and tactics they wish to utilize in that space.

* We oppose any state repression of dissent, including surveillance, infiltration, disruption and violence. We agree not to assist law enforcement actions against activists and others. We oppose proposals designed to cage protests into restricted “free speech zones.”

* We will work to promote a sense of respect for our shared community, our neighbors, and particularly poor and working-class people in our community and their personal property.